This article just helped me connect some meaningful dots... Here is a short recap of what's happening:

Few months ago I felt a longing to go back to Hawaii. I used to vacation there quite a bit and the islands feel like home. But the issue was that there were no funds available for a meaningful trip and I sadly let it go. Few days later, an unexpected inflow of a substantial amount of cash made it possible for me and the family to book one month on Oahu. Some time later I was at a bookstore and met an author who was signing her autobiographical book called "The Girl in a Golden Bikini". I approached her and opened the book on one of the chapters. It was about islands hopping in Hawaii. I struck a conversation with her and she said I must go to the Big Island and actually gave me a contact information of a private pilot who could take me there from Oahu with his Cesna. Around the same time, a lovely person I met during one of my voyages reached out and asked if I wanted to pay him a visit, if I'm in the neighbourhood. He lives just few kilometres from the recent explosions, on the opposite side from the lava flow (the lava flows away from his house). 2 weeks after that, the volcano on the Big I was activated.

Also, right from the beginning, I couldn't help but think of the recent eruptions as adjustments and realignments of the tectonic plates. All this felt like cranium plates finding a better position to benefit the energy flow in the whole body. BTW, this is what I do, biodynamic craniosacral (a gentle touch therapy that facilitates body's intrinsic realignment, no force applied... I mainly supply my awareness to the other's body by following its systems and craniosacral rhythms with my consciousness). Also, for the last few weeks when I meditate, my energy wants to expand and become aware of the whole planet. It keeps happening outside of my conscious intention and feels like stretching exercises, where I have to maintain a strong focus to allow for my field to be rich enough to be able to expand more. This is what I do as a craniosacral therapist, I hold the awareness of the detail as well as the whole of the client's body (The body is a bit like a fractal and the tiniest element energetically contains the information of the whole). I'm not sure if I can hold a whole planet like that. I'm feeling some fear of experiencing the pain of what is going on around the world. I'm also afraid of failure and of being self-empowered. It sometimes makes me want to cry, all this keeping myself smaller than I am. It is so confining... Aside from that, when in meditation I'm seeing 3D sacred geometry figures and some golden symbols that look like digits, but are not understandable to my mind. They seem to be familiar to my energy that really sharpens and spikes in a focused way as a reaction to these visions (BTW, is anyone experiencing sacred geometry imagery?).

Yesterday I went hiking and my attention was drawn to different rocks near a river. I saw one very different than the slate and granite surrounding it. It had a rusty orange elements in it... I picked it up and immediately knew it was a message. The pattern on the rock looked just like exploding lava on the Big Island and very similar to the picture/video Open just posted in a comment. 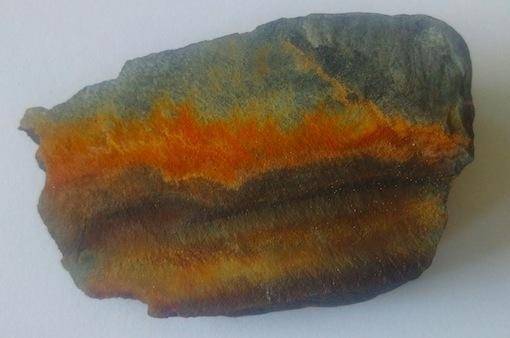 The darker pattern in the middle also reminds me of a mouth. I wonder what it will lead to... I better pay attention. I'm flying out in just few weeks.

I shared all that felt relevant. If you guys picked on anything in my post, please share. My life feels like a movie, like being in a Matrix that consists of symbols and meanings. Part of me wants to be blind to the full picture still...

PS I also have a sense that the "full picture" is ever-changing and as long as I'm aware in a moment I'll know how to be with what is. This makes the fear subside a bit and (almost) all is as it should be and I'm curious again. After all isn't it all about self realization anyways? Perhaps my higher self just decided to go on a little expansion excursion and it picked Hawaii as the perfect energy to do so ;-)