Do the crops get a say on climate change?

So we're still debating whether the climate is warming or cooling. Really?

I wonder which way the crops would vote in the climate change debate right now? They've been speaking to me a lot recently (yes really!) and saying just how parched they really are - they really are close to the point of no return. This is from the UK's Guardian...

Farmers across northern and central Europe are facing crop failure and bankruptcy as one of the most intense regional droughts in recent memory strengthens its grip.

States of emergency have been declared in Latvia and Lithuania, while the sun continues to bake Swedish fields that have received only 12% of their normal rainfall.

The abnormally hot temperatures – which have topped 30C in the Arctic Circle – are in line with climate change trends, according to the World Meteorological Organization. And as about 50 wildfires rage across Sweden, no respite from the heatwave is yet in sight.

Lennart Nilsson, a 55-year-old cattle farmer from Falkenberg near Malmo and co-chair of the Swedish Farmers Association, said it was the worst drought he had experienced. 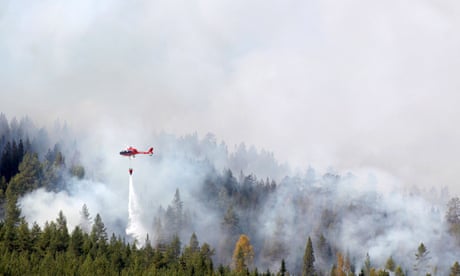 Wildfires rage in Arctic Circle as Sweden calls for help

“This is really serious,” he said. “Most of south-west Sweden hasn’t had rain since the first days of May. A very early harvest has started but yields seem to be the lowest for 25 years – 50% lower, or more in some cases – and it is causing severe losses.”
FULL ARTICLE