WHIRLWIND - For you Marije, (but also Megha, Dagmar and Heiki)

Thank you so much for sharing. I do resonate with you to a very high degree right now. Especially the fear of being labelled as a "mad" person or even worse - discovering I may actually be a mad woman.

You mention kundalini activation and my experience is that ever since my kundalini activated I have been on a steady path to a complete "mental breakdown". About 15 years ago, I witnessed a good friend of mine going "psychotic" due to a pre-mature kundalini activation. For the first few months, she suddenly had all these amazing spiritual experiences and she was describing different dimensions and also different levels and tests you had to go through on your journey in order to reunite with your soul mate or Twin Flame. (I so wish I could remember everything she told me, but it didn't all make sense to me back then). The problem was that with this sudden "opening", it also opened her up to a severe trauma that she had experienced in early adulthood. She had a near death experience with an abusive boyfriend who almost suffocated her to death in a fit of jealousy and anger when she tried to leave him. Even when she managed to get away from him, he kept stalking her for two years afterwards. She also experienced not getting any help from her family whilst going through this situation. She coped with it best she could of course, and continued her life suppressing the event into amnesia. When her kundalini suddenly activated, about 12 years later, so did the post traumatic stress she was carrying. And what I witnessed was that alongside the spiritual experiences, memories of the relationship began to activate. She had a growing paranoia, thinking she saw this guy everywhere and that he was stalking her and wanted to hurt her again. Her anxiety grew stronger and stronger and the benevolent voices she had been hearing before she now experienced as malicious, and eventually she literally started acting "crazy" and psychotic and I had to try and get her admitted to a hospital. I had no other idea of how to deal with something like this. How to help her. It was really intense and I have always wondered why I had to experience being the witness to something like this. Why it was me she turned to when all of this started to happen. When the drama was "over", and they came from the hospital to pick her up, something spiked my attention so hard, I still remember it clear as day: The car that pulled in to take her had the word SIRIUS written in big letters. When my friend saw it, she started laughing hysterically and suddenly exclaimed: "Yes, of course! I have to get Sirius (serious)!" The Universe was giving me my first clue.

So back to my mental breakdown after that detour. I've been feeling this happening for quite a while now. It's been on a milder level up until this summer with cetain cognitive functions beginning to break down and the brain not functioning quite as it used to. This summer, however with two intense Openhand retreats back to back, as well as a crazy summer of going through a thorough medical cancer investigation, going in and out of hospitals and institutions for all kinds of examinations, well I can honestly say, I am mentally (and physically) exhausted. The mild cognitive dysfunctions are now a full blown daily living reality. Short-term memory loss, loss of ability to plan and organise things, disorientation, sudden uncontrolled emotional outbursts of boundary setting in situations where I may have been more tolerant before, feeling the loss of mental control of where situations are heading etc. All of these used to be strong mental "skills" of mine that served my personal identity very well and that I took pride in. Having an excellent memory, being a hell of an organiser and structural planner, and especially the perception of being a "tolerant" person (basically someone who has emotional boundary issues and accepts other people's shit for way too long).

Well, all that is SHOT now, and there is nothing I can do but just accept the experience of it and see who I become when I can no longer identify with the intellectual strengths I had become accustomed to. FEAR was the first thing that came up. Afraid that slowly but surely I may have to accept that I may be headed for what society labels as mental disability or even worse, madness. Well, you can only live in fear for so long, so eventually I just accepted that as a possible scenario and felt the relief of just being ok with it - Come what may... (I feel a bit bad for my kids though if that were to happen, so still some more letting go there).

BUT, hard as it is, here is the silver lining of it all. This complete mental breakdown IS forcing me down a very important path. And I believe the destination is what you OPEN refer to as "The Sacred Ground of Being". My inability to activate and engage my mind the way I used to is actually helping me to start breaking down the incessant mind loops I would constantly get caught in. As soon as a mind loop starts to activate in my head, I instantly start to lose all my energy and this palpable energy loss is alerting me to the fact that I'm back in my head again. I have no other fricking choice but to pull myself out and start FEELING into my core again. Where is the real movement? What is the authentic emotion? Who is the real me? It is in fact the only place that works for me right now. Anything else just zaps my energy right out of me. I'm not saying it's easy to find, and most of the time I'm not there, but there is a subtle shift in focus that is beginning to happen inside of me. The allure of being able to control reality with my mind is actually starting to give way and it feels nothing but tedious and pointless when it starts ranting. The resistance is continually breaking down and I feel a stronger willingness to reach that place of deep inner surrender that may reveal that ever so subtle, almost intangible vibration, that I might begin to call

Further Marije, I just want to say that I love your "craziness" and it has been your freely unleashed expression that has encouraged me to unleash mine. The other day I walked past this painting. It made me smile as it reminded me of our beautiful Circle of Five and I knew there was a specific reason for me taking a picture of it.

It was to remind us of how free we felt with ourselves and with each other. Nothing crazy about it 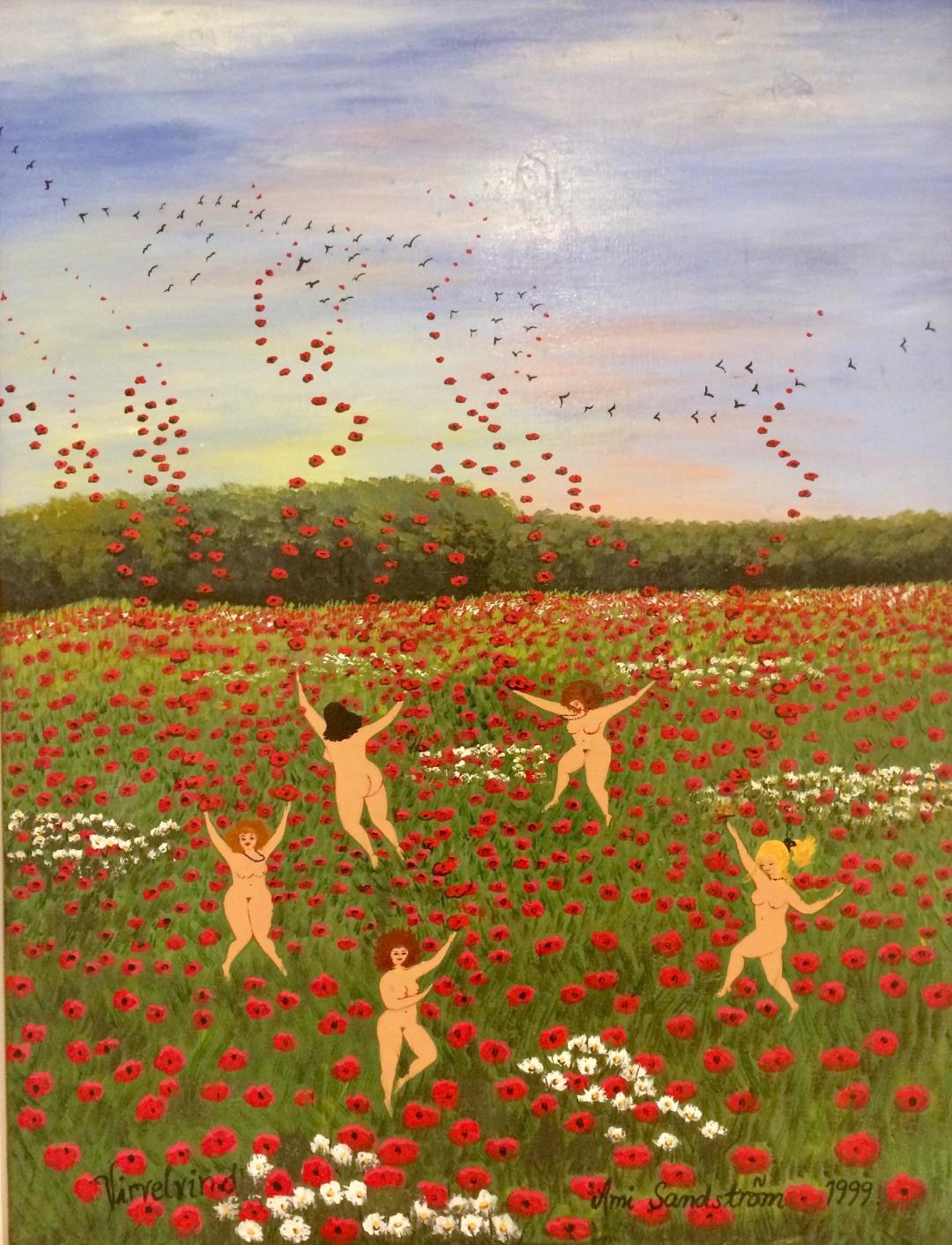