4 Essential Keys to Unlock the Door of Your 5D Being

In light of yesterday's article about the landscape you encounter in Actualising your 5D Being (see above), here are 4 essential keys to help you do it. You can put them to good use in all the regular daily encounters in your life....

1) Firstly, you have to realise what the quantum field is actually doing. I put it to you (and encourage you to explore), that the higher flow is working to reveal you as a being. So when you focus, in any moment, on the actualisation of the highest expressions of yourself, even and especially in all the smallest of things, then the flow itself will connect with these expressions and fulfill them - it will animate and give energy to them; it will create around them.
Here's a video on How to Create in 5D Consciousness
2) Secondly, it helps enormously to have a sense of the landscape that you're flowing into, so as not to get constantly diverted into the lower consciousness. Because the soul has qualities of empathy, if you inadvertently over energise these, then you'll likely get pulled into other people's control dramas - those of the Old Paradigm. However, if the ways of the new are becoming more important to you, because you're giving them chance to breathe, you'll attune the more defined and focussed aspects of the soul, which will help you commit to staying more in the higher vibe, no matter what is going on.
Here's how an empath can learn from a catalyst and vice versa
3) Be prepared to confront where the Old Paradigm hooks you in. It's definitely not about overriding these contractions and tightness, because that just creates the identity of avoidance and a false reality. What's essential is to be so attentive internally that you recognise when these are activating, then to turn right into them. Explore deeply - what is attaching you? What do you think you need in this moment? What can you not accept? By not giving in to the conditioning, but inquiring into the contractive pain, then you normalise in the pain itself. It ceases to hold you. Now you can expand through as the presence of the one, and then unleash soul by paying attention to the emergent energies.
Discover more with this Openhand Breakthrough Approach
4) When you unleash the soul in these contractive moments, and set it free, pay attention to the new consciousness landscape it wants to create around you. This is where signs, synchronicity and metaphor become so important: you look into the 3D world, but you're working to attune to the higher flow, the patterning of consciousness that is reflected. It builds a story, a narrative, of a new way of existence, which you progressively become a part of. It's a reality based on magic and miracles - which create because of the interconnectivity of the higher flow, which is now animating through you. This 'narrative' has to be fluid though, so as not to fix in illusions. Let it adapt, change and recreate, so you're constantly refining your authentic reality. This becomes a part of the new 5D reality construct that we're ascending to. You progressively witness you're focussing in on it, becoming a part of something much greater, that's already taking shape. Most importantly, this will also create new more aligned situations in the 3D - changing circumstances in relationships, careers and general living circumstances here and now.

Here's an Openhand video from a previous retreat that puts into practice catching 5D waves as a 5D Being... 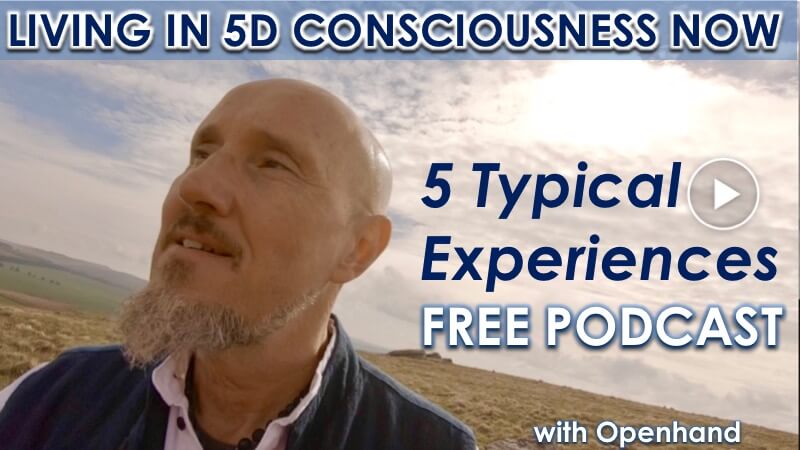 Also check out this free Podcast that shares 5 typical experiences when you're in 5D Consciousness.