Journal Update: Awakening to the Soul Through Sovereignty

19/11/20: Openhand Journal Update: I'm pinching myself a little bit. Didn't believe I'd have reason to say it at this stage, but I can most positively feel a widespread awakening going on. I'm seeing it especially in the determination by plenty of people to change the plandemonium narrative and starting to express sovereignty of being - of the soul. To give an indication of that, during phase 1 of the lockdown in the UK, there was pretty much blanket acceptance and acquiesence. But now, despite draconian measures and mountainous fines, it's calculated in some media that as much as 30% of the population are disobeying the phase 2 lockdowns. That's together with widespread protests in cities such as Liverpool, Manchester, Bristol and London. I also see it expressed in the widespread adoption of cyrptocurrency, and also a growing non-acceptance of the mainstream media propaganda.

Above all though, I believe I can actually feel evidence of this widespread awakening in the field - so much energy revving through it!

But also let me qualify what I mean exactly by "awakening", so as not to get ahead of ourselves. Plenty who visit this site will know of the 5GATEWAYS work, which postulates based on copious evidence, and sharings from previous philsophical/spiritual approaches through history, that awakening takes place through several stages; basically depending on being awake to the soul and then the degree of integration of it.

In my view, what we're starting to feel now, is firstly an awakening to the deception of the mainstream narrative. Which is a degree of awakening on the plane of the intellect. But what I also feel, due to the sense of increase in sovereignty of being, is an initial awakening to the presence of the soul. Which is a powerful development indeed, meaning a widespread channeling and infusion of divine energy.

With this in mind, it felt poignant to give another Facebook LiveStream about my feelings on it, which will take place this Saturday, 21st November. I look forwards to connecting with plenty of you there

Here's where you can find it: Openhand Facebook Page
(It will also be posted here on Openhandweb afterwards) 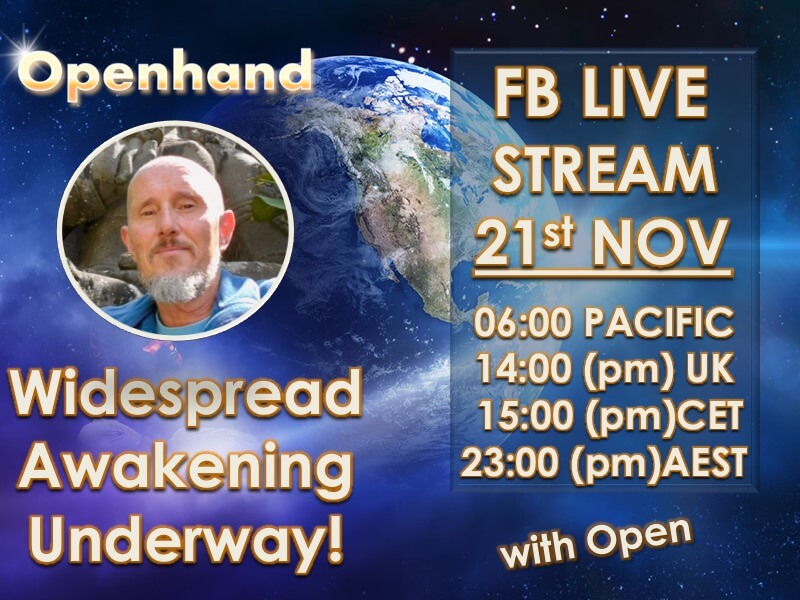