I was following the stream. I couldn't hear anything but the sound of the stream, as if she was continuously giving me instructions. There's path ahead which was barely visible. who would have taken such a difficult path through this deep forest valley, I wondered. I reached a point where there is no proper pathway ahead, only a slanting edge of a massive rock. I was worried that I wouldn't be able to make it, but there were these tree roots tightened into the rock that helped me pass by. A butterfly has just flown away from the tree branch I was holding for support. I apologised. 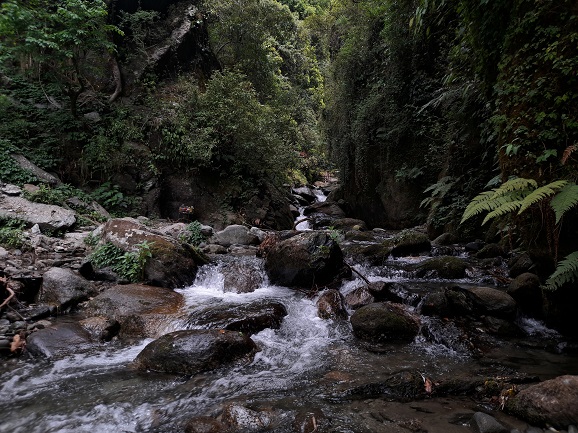 Where am I following the steam ? It's been a long trail through this dense forest. It began to rain lightly, making my voyage even more difficult. The sound of the stream gradually increased to a roaring sound. I saw an old ladder slanted to a rock guiding somewhere. I climbed that ladder to get to a waterfall which was stunningly beautiful.

Is this where the stream was guiding me? I found a lake nearby with crystal clear water that caught my attention at first sight. I slowly approached it, gazing out at the water, where I saw this beautiful rock. I couldn't help but take the rock in my hand and look at it deeply. I couldn't take my eyes off it. I felt like I’m holding myself inside my palm. It was a strange feeling, but I was completely immersed in it. Suddenly something flashed in me, and the rock disappeared from my palm.

I was once this rock.