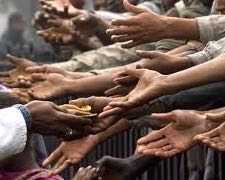 A report by the charity Oxfam has recently revealed a staggering fact about injustice and inequity on our planet: 62 people, just enough to fill a reasonable sized coach, now own as much wealth, as the poorest 3.6 billion. Does that not bowl you over? And the wealth of the poorest, in comparison to the richest, fell a whopping 41% after the credit crunch. Doesn't that tell you something else? The level of injustice and inequity on our planet has reached breaking point, and those that lead, seem either ignorant or careless. Such injustice is woefully misaligned from a consciousness viewpoint. It won't continue. It can't continue indefinitely. I do believe we're fast reaching a climatic crux point. What can evolving people do?...

First of all, it's important to recognise the redundancy of this old reality - like a worn out car, done way too many miles, that's guzzling gas and pumping out noxious fumes. Don't hide the fact, don't bury your head in the sand. Although such staggering inequity is enough to make you want to turn your back on it all, resist that; instead, look it square in the eyes...

Evolutionary growth is most invigorated by souls yearning for change. When you consciously witness the old way of being just doesn't work anymore, and you feel that in every fibre, let your warrior energy well up and ripple through the field, with an energetic roar - "It's time for change!"

You don't have to fight, effort or struggle. For people on the path, expansion of consciousness is the most powerful tool you have. Use it!

It's also vitally important that you don't wait for the New Paradigm simply to come. You have to move to it. Inside of yourself. There's a new density of being, a new frequency. What are its facets?...

These are only some of the main points to focus on - they're a good start. Time to begin!

Watch and live the transition

The universe is a continually flowing and reshaping Quantum Soup - where everything is interconnected. If there are lumpy coagulations (like the staggering fact that just 62 people own as much as 3.6 billion!), then reality bends around that blockage and starts to flow into it, working to unwind it and find balanced harmony again. So expect that change will happen - the only constant in a flowing universe is change.

Watch keenly for the changes happening in your life: in the nature of your relationships, your living environment, and how you work. Embrace and honour the changes, then you infuse the new consciousness into them. However resistant the situation may on the surface appear, underneath, things are shifting.

So watch and live the transition now. Even if the changes only appear small. Take them, and watch reality begin to change. It needs to, for the good of all sentient life here. Take that step...

About Openhand Openhand is a unique approach to spiritual evolution: integrating enlightened wisdom of spiritual masters through the ages, it is a way of tapping into the Benevolent Guiding Consciousness of the Universe and aligning with it in your life. It helps you unveil your True Self, remove karmic blockages and unfold your Divine Destiny. It leads to authentic, resilient and truly successful living. Follow us...Openhandweb, Openhand fb, Openhand TV