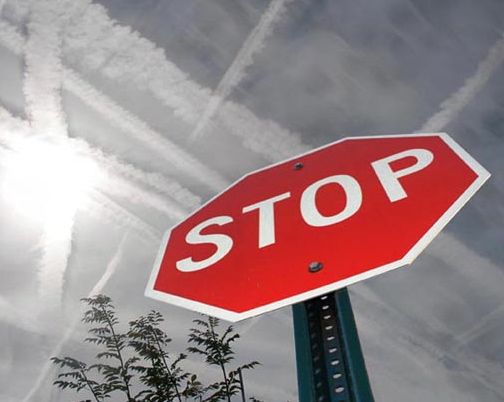 The awakening 'alternative' media has been reporting it for a good while now, but many have simple dumped it in the 'just-another-conspiracy-theory' file 13. Well now science is beginning to come 'clean', well sort of, at least according to this article in the UK's Guardian. But are they simply pre-empting a public backlash? Are they preparing the world for more geo-engineering control; creating the fear of "Global Catastrophe" to justify continued 'experimentation'? It's something we need to build consciousness around because it's beginning to affect all our lives...

According to the article...

"Met Office researchers have called for global oversight of the radical schemes after studies showed they could have huge and unintended impacts on some of the world's most vulnerable people."

Well yes indeed. But we need much more than global oversight - ought we not let Gaia herself watch over her own reharmonisation of her own climate?

"The dangers arose in projects that cooled the planet unevenly. In some cases these caused devastating droughts across Africa; in others they increased rainfall in the region but left huge areas of Brazil parched."

I rest my case!

"Geoengineering comes in many flavours, but among the more plausible are "solar radiation management" (SRM) schemes that would spray huge amounts of sun-reflecting particles high into the atmosphere to simulate the cooling effects of volcanic eruptions."

Ah yes, you mean like the chemtrails we've been seeing all across the planet for many years!

"In 2009, a Royal Society report warned that geoengineering was not an alternative to cutting greenhouse gas emissions, but conceded the technology might be needed in the event of a climate emergency."

When will we learn? We've created the emergency. Now we need to let Gaia respond, realign and reharmonise without our intervention. Of course it's likely to continue, the mainstream have not yet moved beyond the meddling. We need to be aware that as more of this goes on, the stronger the realignment will ultimately be.

"The scientists took a typical project that would inject 5m tonnes of sulphate into the stratosphere every year from 2020 to 2070. That amount of sulphate injected into the northern hemisphere caused severe droughts in Niger, Mali, Burkina Faso, Senegal, Chad and Sudan, and an almost total loss of vegetation."

This is one of the huge problems, not least the unbalanced climate effects, but the heavy metal sulphates are falling to the earth, intoxicating the surface and destroying plant life wherever they are sprayed.

Matthew Watson, who leads the Spice project at Bristol University, said the study revealed the "dramatic consequences" of uninformed geoengineering..."This paper tells us there are consequences for our actions whatever we do. There is no get-out-of-jail-free card," he told the Guardian... "Whatever we do is a compromise, and that compromise means there will be winners and losers. That opens massive ethical questions: who gets to decide how we even determine what is a good outcome for different people?"