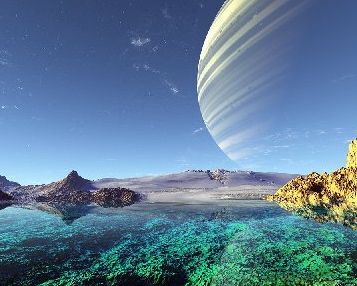 Much has been written in recent times - especially through 2012 - about our planetary "Ascension". What exactly does the term mean? What is going on? To me it is an entirely natural evolutionary flow of the universe which although can be explained in scientific terms, can only really be grasped through spiritual realisation. To me, it is the movement of sentient life from one vibrational frequency of reality into a higher one. Along with a growing number of evolving people, I perceive Ascension is happening on Planet Earth right now as Gaia shifts her centre of consciousness into the 5th Density (and higher)...

Take yourself back to the beginning of the universe for a moment. Close your eyes and imagine the point before which all of the physical universe came into being - before what science called the "big bang". To me, there is nothing, where nothing is everything. And this nothing/everything has two possibilities: it can either remain in that state of pure presence or, it can subdivide into parts of itself. Given the state of infinite time - because at that point there was no time - then you have the absolute probability that both states will happen. 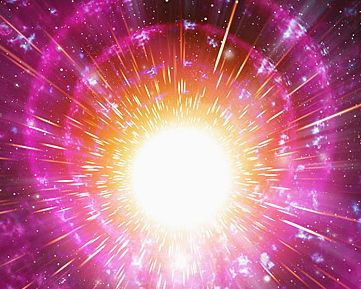 In other words, it is inevitable that pure presence will subdivide into parts of itself, where the 'parts' are consciousness, an awareness of relativity: "this" and "that". This one underlying dynamic has shaped the entire universe. A chain reaction of internal sub-division caused a rapid explosion outwards. Or if looking from the whole of it, a rapid subdivision inwards, depending on ones perspective. Whatever and wherever the perspective you look from, there is the movement of energy, of consciousness, of light. They are all one and the same thing.

Over time, the spread outwards of "Separation Consciousness" to fill the universe with light, begins to condense into form, with the equal and opposite pull inwards of "Unity Consciousness". You might consider yourself as the 'creator', casting a pebble into a universal pond which then creates ripples in space. The flow outwards on the surface is counterbalanced by an undertow back in to the source, thus creating standing waves, a metaphor which aptly describes densities of consciousness - Dimensions of Reality - that take shape within space.

Both science and spirituality have spoken of 11 dimensions - or more accurately "densities". Personally I have many direct experiences of these and can feel them arrayed into three realms of consciousness: the Lower Realm enfolds the 1st, 2nd and 3rd densities which humanity mostly currently resides within. It is separated by a karmic bridge/barrier which I know as the 4th Density, leading to the Middle Realm enfolding the 5th, 6th and 7th densities. This in turn is separated by another barrier/bridge, the 8th density leading to the Higher Realm of the 9th, 10th and 11th densities. 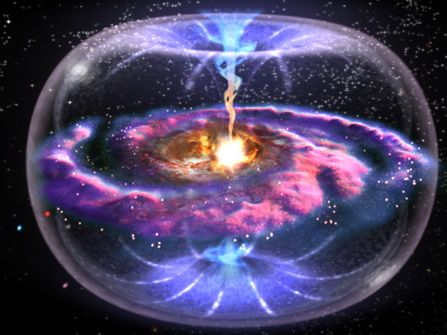 The contraction or 'condensation' of the universe into physical form seems to be taking the shape of what science is calling the 'torus', which may be considered in the metaphoric form of an apple. In the centre is the source - a vortex of spinning emptiness - and spiralling outwards are the dimensions of increasing density, from 11 down to 1. In my view, form takes shape first in the outer densities, as the higher degree of disorder propels the gathering consciousness outwards like the centrefugal force of a washing machine.

Within each system of life that is created, there is inherent instability, which is caused by the pull of Unity Consciousness back to the source; an agitating, catalysing energy which is ever seeking out higher perfections. Over time, each harmonic system of life decays, falls apart and then re-orders itself according to a higher harmonic frequency. So progressively, life is drawn ever higher through the densities until it reunites with the source. This process of moving upwards in frequency is Ascension.

In the meditation groups and courses that I run, awake and evolving people are tuning in and feeling this process happening for Gaia herself right now. I've worked with a number of sensitive and empathic women who can feel Gaia as if she's giving birth to a New World in the 5th Density of the Middle Realm. It's a truly miraculous and breath taking process to witness and feel. It coincides of course which many of the ancient prophecies such as that of the Mayans. Although much distortion and hype has been written, it feels very much as if that process will indeed complete towards the culmination of 2012.

What will that mean exactly for life here on Earth? Well firstly it is vital to say that it won't immediately end! Gaia is a multidimensional being and under usual circumstances, able to sustain life in both parallel worlds. That said, the rate of consumption and destruction of the Earth's surface here in the Lower Realm is accelerating at such a pace, it feels like various tipping points have been activated which could indeed bring life to a cleansing completion in a time frame that could be as little as two or three human generations, assuming current trends continue.

This may cause incredible sense of internal turmoil, emotion and resistance to what could take place here. But again, it is an entirely natural evolutionary process in the life of a star. Gaia has cleansed her surface five times in her past history, in order to allow a new harmony and balanced sense of 'rightness' to take on new form. It is this very process which is causing the old systems of consciousness in which we've lived, to fracture and fall a part right now. The strain under which we observe the current financial system is a classic example. An old disharmony of inequity and injustice must shatter in order for the pull of Ascension to reorganise a higher one.

Why is it then that our society seems not to observe or accept the idea of Planetary Ascension? It is because the physical aspect of the human body which many identify with is only designed to tune into three dimensions reality, the physical Lower Realm. We are each bombarded with literally billions of bits of information every second about our reality and yet the average human brain can only process a very tiny proportion of this. To cope with the overload, the brain forms a map of the reality it has come to expect and filters out the rest of the information.

Since our reality is shaped by what our consciousness is attuned to, then our experience of reality becomes severely limited. In other words we confine ourselves to what we experience only at the edge of the universal 'pond'. Whether we know it or not though, this underlying flow of consciousness is affecting every single thought feeling and emotion that we currently have. By our alignment with it, or our insensitivity, denial or resistance to it, every single action is shaped in our lives. It is the underlying flows of cause and effect as they pass through us that shapes the circumstances of our lives.

The more conscious and aware of this process we become, the more harmonious our lives can become. As we begin to surrender the need to shape the external drama, then we engage onwardly the flow of Ascension, felt as a pull through the heart or the landing of simple inner knowing..."This is what I must do now. This is how I must be now". When we align with this inner pull increasingly through the daily interactions of our lives, continually finding and centering in our higher aspects of beingness, then attachment to the lower densities unravels and our consciousness begins to expand and ascend through the dimensions. We experience this multidimensionality as a sense of interconnectedness with all life, an underlying flow which shapes the circumstances of our lives with benevolent intent. It feels increasingly harmonious, empowered and joyful.

We unfold through what's been termed the "Five Gateways" of consciousness, and when the physical body falls away, there is no longer the need to reincarnate here. Our learning experience has been completed and the time has come for higher reality experiences in a finer density.

This is the invitation that the benevolent open hand of the universe is currently extending to humanity in these amazing times of powerful transformation. If we let go of the need to shape our lives, and attune to the unraveling, unfolding flow of Unity Consciousness we can feel as the soul within, then we'll align with this movement and ride the wave into the higher paradigm. As the old structures of the lower density fall apart, we'll continue our journey in the new realm on a Renewed Earth. To me, this is the situation humanity and our planet currently finds itself in. Ascension is our challenge and our opportunity.

Are You Ascending? Here are the 5 Key Symptoms