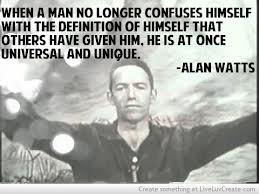 I felt to share this amazingly powerful video by the famous Buddhist Alan Watts - an amazing character, with a core splitting, clear view of life and the world. In it, he sums up so eloquently in my opinion why humanity is in the mess it's in, and offers profound insight in how our biggest issues may be resolved. It's essential to realise the source of the problem: which is a false Human Identity itself. That's why he believes (and so do I), that we'll never solve the problems we face with the identity itself. That's like a turkey voting for Christmas! As he suggests, we must instead 'hand over the direction of nature back to nature'...

The magnitude of the Human problem

Steadily the magnitude of the problem we face on earth is coming into view. Yet it's still being seen through many veils. Blame is being directed here, there and everywhere. Everywhere but the source of the problem itself. What is the problem? Humanity himself is the problem: or rather the false sense of who we are...

And that's why many of the suggestions of how to solve the planet's problems are not going to work: because they're coming from the very ego that created them; and they're designed to protect the ego that created them. Even many spiritual 'truths' are coming from the ego and are subtly designed to protect such identity (like intentional manifesting for example). How many people would willingly accept the demise of themselves - as an identity - if that's what it took?

So our false sense of who we are is the problem. We've built an entire society that spans the globe to placate and protect that identity. And as Alan so poignantly points out, the identity can do nothing about it. So what can we do?

Alan suggests we must 'hand nature back to nature'. Which means to allow the natural harmonising - the natural realignment - of life to simply happen. It can happen through us. And we can become once more who we truly are: that very realignment process itself; that flow; that movement; that arising. And to ride with that wherever it may go. Even to the destruction of the identity.

Is there anything we can do to facilitate that?

Where I particularly concur with Alan is to begin by watching - to watch and be deeply present with what's taking place around you in your life is the crucial first step. Presence then starts to 'reassert' itself. But in addition, I also believe you can set in place a unraveling catalysis - one which accelerates the unraveling of the false self.

It's a process I call Openway. Put simply, it's by watching what's going on, seeing your tightness in relation to the world - your identity - and then softening into that tightness you feel. This opens the heart. You become a part of the flow. Which again, cascades you into ever deeper tightness. Just bringing presence and light into these internal resistances, can be enough to open the flow through them. And then you open into the Void of Presence - the Source of all life itself. From which, the stream of your true self flows. Then Right Action simply happens.

In my opinion - and his - that's the only way to now solve humanity's problems. Just to let the flow unravel our false sense of self - wherever that may then take us. Even if it leads to our death. Bearing in mind, that death is simply passing on into another form of life.

I know many will find it hard to believe it can really be so simple: that actually, when we 'do' this, then the miraculous nature of life simply recalibrates and reorganises itself through you. There's simply no need of intentional manifestation. It's a pointless waste of time that only delays the inevitable.

The ego will never be able to imagine the entirety and perfection of life itself. Therefore it can never imagine a solution for life. Life is the solution. So let life flow.

It's time to let go. To surrender and come back into the natural flow of realignment. Even if that leads to the destruction of identity. And when it truly happens, we discover the wonderful secret itself: we never really lost a thing; instead we gained the entirety of the universe. The most amazing thing about this video, is that it was shot in the 1970's. Really?

Clearly Alan was a man way ahead of his time. Perhaps there's a reason. Perhaps because he'd become a part of the flow. I would say so...

an absolutely amazing video! thank you.
for whaever reason i originally posted my reaction to it to the COOKIES thread (haha) but here it is too (Im a bit out of it all these days...)

"oh, and btw, the Allan Watts video!!!! Now THAT's a treat!! OMGosh! Filmed in the year I was born! At 10 mins my heart quietened to an almos halt and tears of happiness started to stream down my face - in humble and simple acceptance."
and now some cookies...
- See more at: http://www.openhandweb.org/comment/16584#comment-16584

'The human race has to learn

'The human race has to learn how to leave the world alone'. It seems this is quite shocking for our pride - but this is it - THE POINT people don't allow themselves to get. This is so close to home for me. This is brilliant. Thanks for sharing Open.