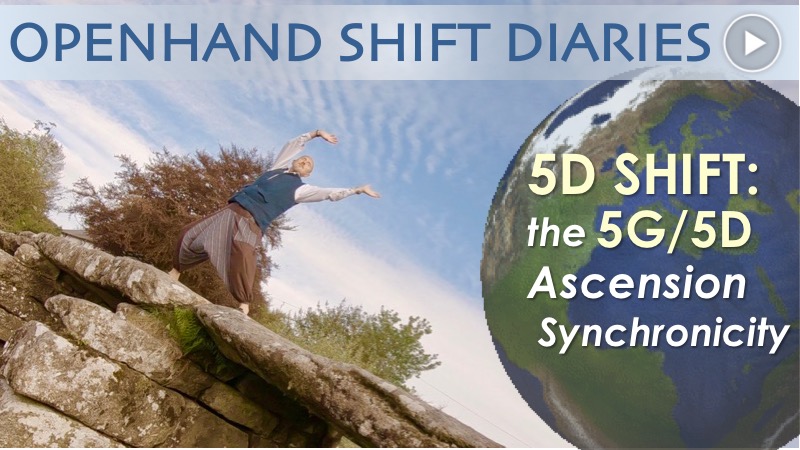 It's an illuminating synchronicity that the new 'SMART' mobile phone technology "5G" is being rolled out exactly at the time when a wave of people across the world are expanding consciousness into 5D.

What are the implications?
Here's an active video diary from Dartmoor in the UK...

5G/5D - having fun with a serious subject

As you can see, we had some fun and a real sense of adventure making this latest Openhand video about the stunning 5G/5D Ascension Synchronicity. For us, it's always about normalising and equalising with the truth of the situation.

Thank you for that video. I was struggling with the topic and the synchronicity - that helped x

MY thoughts - What this whole FiveGee thing makes me think is how insatiable humans are. Is what they already have not enough? What is FiveGee for? Just what for?? It is like they would have 10 types of yogurts and then a new, 11th type will appear. There is no end to this and to me this is a distortion of creativity and innovation - when these constructive forces are directed towards negative destruction. There is also a positive destruction, needed in order to create something new. Destructivity is one of the inherent qualities of every human being, just like it is a pure universal force. I myself can recall several times in my life when I practiced constructive, positive destruction and also when I practiced a negative kind of destruction. I believe it is a learning process, a collective one, and, unfortunately, the negative type is more powerful than the positive so far. Humanity could choose positive type - stop doing what they're doing, causing the destruction of the system and then out of that something better would arise. But then I ask - did they really have any choice? Did I? It was only when I was 28 when I was brought to information and realisation and idea about an alternative, and even then I was sucked back into the old ways not once. Is there a choice at all?

My feelings - a kind of hopelessness about humanity. They don't get it. The majority doesn't get it. They will consume whatever is served even if it is pure poison and another bar in the prison-cell they are being held in, provided enough comfort and distraction. The positive thing is that this kind of compliance also ensures that if somehow somebody sane and conscious takes the lead, they will follow just as well.

I feel a lot of fear these days. I am, as you say, challenged about physicality, mainly the fact that I have physicality at all. It somehow becomes more and more annoying and the discomfort increases. Maybe it is age, maybe it is what is going on in the world, the insane acceleration of time, disconnecting vibrations - maybe it is everything together. I am experiencing all kinds of things, on all levels, but mainly I have this intense yearning to just go home, like I've had enough of it all. In these moments I recall there is a reason why I am here in the first place, and I just let it flow. Humour does help.

Additional synchronicity is that FiveGee is 5 Gateways (this is how I always wrote it, just FiveGee), now getting a new meaning.