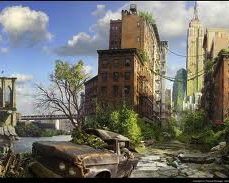 My attention was drawn recently to an article in the mainstream about the predicted collapse of civilisation "happening within decades". It's something many are talking about in the alternative media and we've spoken of in our Great Realignment series of articles. So why are the mainstream talking about it now and who is behind the study? Knowing these things might offer some clues as to what events may unfold in society. For me, digesting the distinct probability of collapse means you can prepare yourself, especially your consciousness, to let go, take centre stream and allow the soul to guide the ship...

The study was sponsored by Nasa's Goddard Space Flight Center and highlighted the prospect that global industrial civilisation could collapse in coming decades due to unsustainable resource exploitation and increasingly unequal wealth distribution; that this is actually a recurrent cycle in the history of civilisation and the planet. The research project is based on a new cross-disciplinary 'Human And Nature DYnamical' (HANDY) model, led by applied mathematician Safa Motesharrei of the US National Science Foundation-supported National Socio-Environmental Synthesis Center, in association with a team of natural and social scientists. What they've drawn attention to is this...

"The stretching of resources due to the strain placed on the ecological carrying capacity"; and the economic stratification of society into Elites [rich] and Masses (or "Commoners") [poor]" These social phenomena have played 'a central role in the character or in the process of the collapse,' in all such cases over the last five thousand years. Accumulated surplus is not evenly distributed throughout society, but rather has been controlled by an elite. The mass of the population, while producing the wealth, is only allocated a small portion of it by elites, usually at or just above subsistence levels."

Of course this creates great disharmony amongst people thereby escalating the degree of social unrest and risk of complete collapse. The powers-that-be are not dumb! (even though at times they may act so). I did say in The Great Realignment, that those pulling the strings of society would likely try to pre-empt any destabilising shift of climate and the bioshpere - that they'd try to manage and control the breakdown. Is this study then an attempt to sweeten the pill and prepare people for false flag operations aimed at increased control? Very possibly.

No controlling the Shift

They may try to control the shifts that are coming, but in my vision, that's not going to be possible. The genie is already out of the bottle. The consciousness is humanity is ecxpanding as Gaia continues to draw her energies into the fifth density. Another interesting observation came from the study - something I've also talked strongly about previously - which is the hidden cost of advanced technologies like so called "free energy" for example...

"The study challenges those who argue that technology will resolve these challenges by increasing efficiency: Technological change can raise the efficiency of resource use, but it also tends to raise both per capita resource consumption and the scale of resource extraction, so that, absent policy effects, the increases in consumption often compensate for the increased efficiency of resource use. Productivity increases in agriculture and industry over the last two centuries has come from 'increased (rather than decreased) resource throughput,' despite dramatic efficiency gains over the same period." Read full article here in the UK's Guardian...Industrial civilisation headed for 'irreversible collapse'?"

There is no such thing as 'free' anything! In a universe of relativity, every cause has an effect. You may take energy from the zero point field, but with what will you apply it and what will be the effects on other life? Especially on a planet where other sentient life is already being ridden rough shod over.

So how shall we awakening souls deal with what must surely becoming blindingly obvious? Especially as the inevitable collapse of society is now hitting the mainstream? (as sure sign there's not too much longer to wait). As distasteful as it often is, I'd say we must continue to make use of the matrix whilst it's still there - especially as the powers-that-be own most of the resources! But let's not be hoodwinked that this reality has any kind of future to it. Read the daily news yes, but feel the deeper meaning of the flow.

Where is it going? How is it unraveling? And most important of all... How might I accelerate my evolution into the next paradigm?

The rise of the Divine Being

Currently I'm on Dartmoor 'penning' the finishing touches to my new book Divinicus. It's actually more a project, ((Divinicus Cometh), it's a shift in gear, to urge those who can step into the spiritual centre stream. I'd taken a couple of hours off today, and as I was driving across the moors, a pull caused me to stop by a lovely, jinking river (like the one in the picture). Seeking out a large boulder in centre stream, I sat down to meditate. A "staring eye meditation", which meant any sense of separation dissolved as I became totally at-one with the stream. 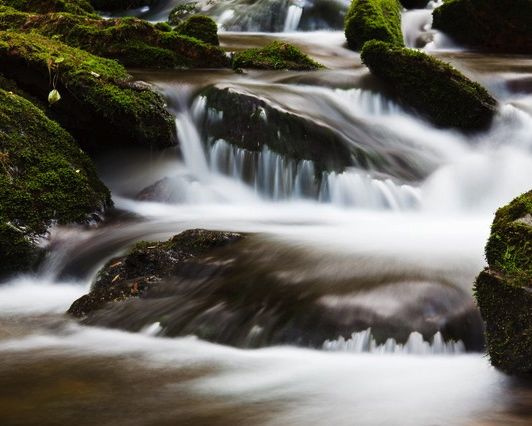 It's water was literally washing cleansing energy through me. And after about 30 minutes (time had seemed to stop), Gaia 'spoke' to me through the stream, as a telepathic knowing exchange:

The stream of realignment is gathering speed and strength. Nothing will withstand it's direction, no matter how some may try to control it. Yet within the stream are large boulders, like islands, where you may find rest, rejuvenation and security. These are the places your soul will seek out. They'll become like stepping stones into the higher paradigm as the old world peels away around you.

Wishing all well as you navigate your way carefully through this Great Shift.

I love to follow your adventures. I feel very connected when I read and get so inspired to make my own "walkabouts"