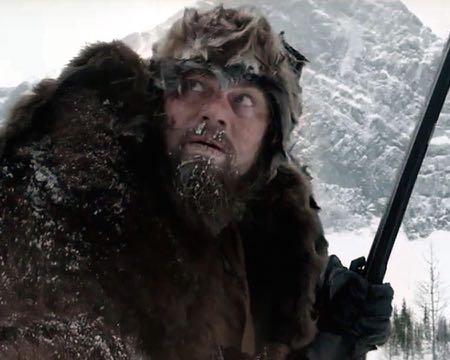 Every now and then a powerful film shows up that speaks into the depths of humanity's soul. To me, "The Revenant" with Leonardo Di Caprio is just such a film. It tells the factual story of Hugh Glass - a legendary frontiersman - mauled by a bear and left for dead in the wilderness by an unscrupulous colleague. So as to disguise his culpability, the colleague takes the life of Glass's son, as he is powerless to respond. Glass fights his way back to fitness and goes off in search of the colleague. If you still have it, this film is sure to activate the karmic pain of humanity's brutal past. One each must work to find peace with...

It is no doubt a brutal film and not for the squeamish. Yet through the brutality, there's also a tenderness and clearly expressed divine connection. It spoke to me of the harshness of the raptor consciousness here on Earth, which has poisoned both man and beast. It took me into the pain of many lost sons and daughters. It dealt with how you might understandably feel to take some kind of revenge action.

But revenge of course is an extremely negative, poisoning energy. There is rightness, fairness and justice, which so often in humanity's history has been used to thinly veil revenge. In this film, you clearly feel that Glass is left with no choice - that it would be right to take action. And so despite being nearly mauled to death, he summons the warrior spirit and heads off in pursuit.

There are many twists and turns along the way. Especially at the end. You get the sense that there's a divine acceptance of the sometimes harsh physicality of life, and yet the need to find rightness. Above all, it's one of those films that so accurately expresses buried karmic pain. And it's highly likely to activate it in you. If it's there, of course you have to process it in order to advance spiritually.

You can regress into this pain, and do so in a safe and protective space. Karma is creative, it recreates similar experiences, so if you can process and get rid of this baggage, you'll naturally create more harmonious realities going forwards.

So you may feel drawn to see it. I do believe it's one of those messages for humanity - about humanity. Be aware it will likely activate some karmic pain in you. If so, then do remember Openhand's 9 step process for dealing with it. Here's the trailer to give you a sense of it...

An honest protrayal - looking for the light

Yes there is brutality in this film. Yes there is violence. But it's done in a way so as to ask a question. You feel that it's done not to shock or to sensationalise - it's an honest inquiry and looking for the light in such challenging circumstances.

I felt such a profound sense of relief and peace at the end of the film that surely must come when we fulfill our karmic destiny, let go of the body, and move beyond into the cosmos.

Yes, the violence and brutality is all around us as part of our collective consciousness and it is imperative that we seek and find the light beyond in the One that contains it all without flinching and without judgment.

I feel like I need some help with this. Terry Oldfield's whale music is calling, so I'm going to be a whale rider today and dive into the depths with my mighty friends.

Forever grateful for your encouragement and insights,

Wonderful that you have the courage

There's no problem with that Catherine - I suspect many on the path turn away from such density. But ultimately that would be self defeating. All of this exists, it's right under our noses right now, and it's all contained within the One. To truly be the One, is to be able to hold that.

Wonderful that you're having the courage to explore.

I was strongly drawn to seeing this film a week ago despite a well-meaning caution from a family member who was concerned that I wouldn't be able to withstand the brutality and violence. I bowed my head in a few of the gory scenes and closed my eyes. I felt a strong connection to the character of Hugh Glass and to his enormous pain and suffering that tore me apart to witness. Also to his monumental will and determination to set things right for the murder of his beloved son. In reading your article today, I realize that I have turned away from the deeper levels of karmic pain around this.