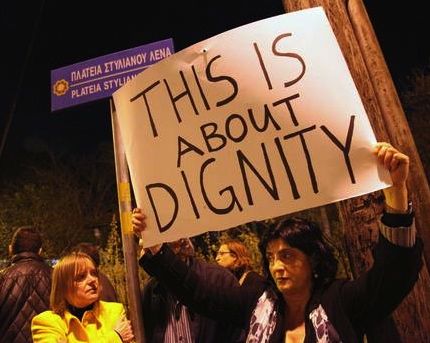 The picture says a great deal. Yes the pressure on the banking system in Cyprus is about so much more than the economy. It's about people's dignity, it's about their freedom of being. European populations are still being hoodwinked that centralisation is good. It might be good if you're a banker or an MEP, but to me at least, it's certainly not good in the long term for the proverbial 'man on the street'. Is this another nail in the euro coffin? I do believe so...

I know I've said it a number of times on this site: that the EU basket of countries does not serve the general public (it's a basket case!). Yes they've created economic growth, but through artificially bloated economies by stimulating consumerism based on low interest rate credit. When Greece joined the EU for example, the general public was hoodwinked, plastic in hand, bustling to buy the very latest designer goods. Well that bubble has now well and truly burst. Prior to centralisation, the people may have had less, but at least they had local based economies which were more self sufficient and resilient. Now many of those local businesses have gone under due to rising tide of globalised brands. You see it happening everywhere. Even here in Glastonbury, the local businesses suffer at the hands of the big corporations.

So the way it works is that people jump headlong into the global economy, become slaves for the corporations that inexorably plunder the worlds resources, who then have the audacity to lend people credit notes so they can buy the resources back again. Yes, as crazy as it seems, that's what's been happening for some several decades. It's destroying people's dignity and the planet to boot.

This system has to topple. I believe the initial signs are there that it is. It just needs a key to unlock the door, one country to leave the euro, and then stand well back to watch the exodus. We face challenging times ahead as Gaia continues to shift her energies into the higher paradigm. This is all about the realignment of energetic disharmonies (like centralisation). But if we can become more self sustaining and localised now, then communities will be much more resilient as the tides of change sweep the old world away. I'm sending that message out as a catalytic beacon of change.

A fascinating analysis of the current banking fiasco...