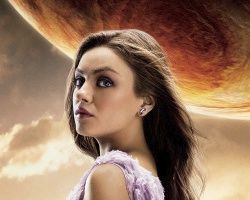 These spiritual films keep coming thick and fast. No wonder, we're sailing through extraordinary times; humanity has an extraordinary tale to reveal. No matter that the mainstream keeps selling the lie, the truth is bubbling up in our consciousness and won't be deterred. Movies and media have evolved the age-old art of story telling, where parable and metaphor convey truth so exquisitely for those tuned into their feelings. Yes it's dramatical and fantastical, but so is the human story. "Jupiter Ascending" is another in a long line where you can glean some missing pieces of the jigsaw...

I won't spoil the story for you, and although just a fantasy, there are several essences of truth that literally leap off the screen...

Elevation of the divine feminine

Yes it's just fantastical fantasy, but especially this last part touched me deeply. Being a catalyst, my personal mission is to confront and strip away density in the field - to help make space for the emergence and liberation of the divine feminine...

Because right now, in my humble observation, that's what the world needs most of all - the elevation of the divine feminine. And our earthly mother Gaia needs it most of all. I feel that's what all souls drawn here are working to achieve. I've shared this in detail in my book...Divinicus.

With its flash bangs and battles, the movie won't be for all sensitives, but I do commend it for its capacity to fill in some of those missing blanks. Here's the trailer. Enjoy... Open

I simply had to see this. I've been noticing Jupiter in the night sky over my cabin for a week or more now, it seemed to herald in the film. So last night I went along with Pennie.

Well its full of action sequences and a very full on movie, a few too many chases for me personally, but the story. Wow, it felt like so much of it could have been lifted from the Divinicus story, so many synchronous portrayals of players in the universal history that is mankinds hidden story. It was quite incredible. Recommended, if you can take the fire power of the intergalactic weaponry.