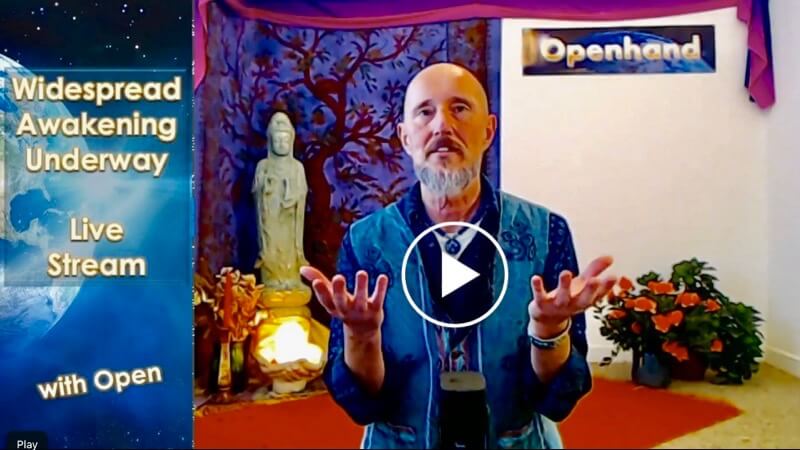 I do believe there's strong evidence of a Widespread Awakening Underway as the Lockdowns and Draconian measures in the name of the plandemonium are backfiring. People across the world are demonstrating for their civil liberties, there's a strong upsurgence of soul sovereignty and cryptocurrencies on the blockchain are booming. That's what I'm exploring in this Facebook LiveStream.

23/11/20: Openhand Journal Update: I enjoyed sharing the livestream on Facebook last Saturday (see above). It's always a pleasure feeling people in the community connecting in - what a joy! I do feel like we've reached another very pivotal point across the planet right now, and the American election is a big trigger for that. I've received some objections from some newcomers to the community for 'daring to get involved in politics'. Just to be clear, actually I am not. I don't support one political party or the other. I agree and disagree with policies and energies on both sides. As I pointed out in my video, I see a future where government can be elected on the block chain which is truly by the people and of the people, where each voter has a unique and verifiable address.

What I believe should sound alarm bells to all, is how the mainstream media is trying to call the election before it's truly decided and censoring any contrary information that irregularities did take place - of which there are now hundreds of sworn reports. And what's more, is that people are being told it's "unconstitutional" and a "threat to democracy" to even challenge the outcome (where such evidence clearly) exists - what a fascinating juxtaposition of the truth. It feels to me like an energy is trying to ride roughshod over democracy.

What does this have to do with spirituality and the shift? Everything!

What's happenng in the States, and now rippling around the world, is a clear statement from a growing wave of expression of soul sovereignty - that we won't be locked down into the 4th Industrial Revolution without our input - without our consent. People are rising to protect their freedoms of movement and expression. It's to me a strong sign that soul is becoming strongly active. That's NOT saying which way the soul 'should' go, or which way to 'vote', it's saying let souls express freely and freely be heard. That way we can all empathise and understand. We can positively influence each other.

The election is far from over. I do believe it's coming at, and triggering, a turning point for a lot of people. As I said in my livestream above, it's happening at the same time as there are widespread protests around the world to the increasingly draconian lockdown measures. it's time we all gained a voice of personal expression and dropped the fear of expressing it.

Much love and freedom of expression to all!