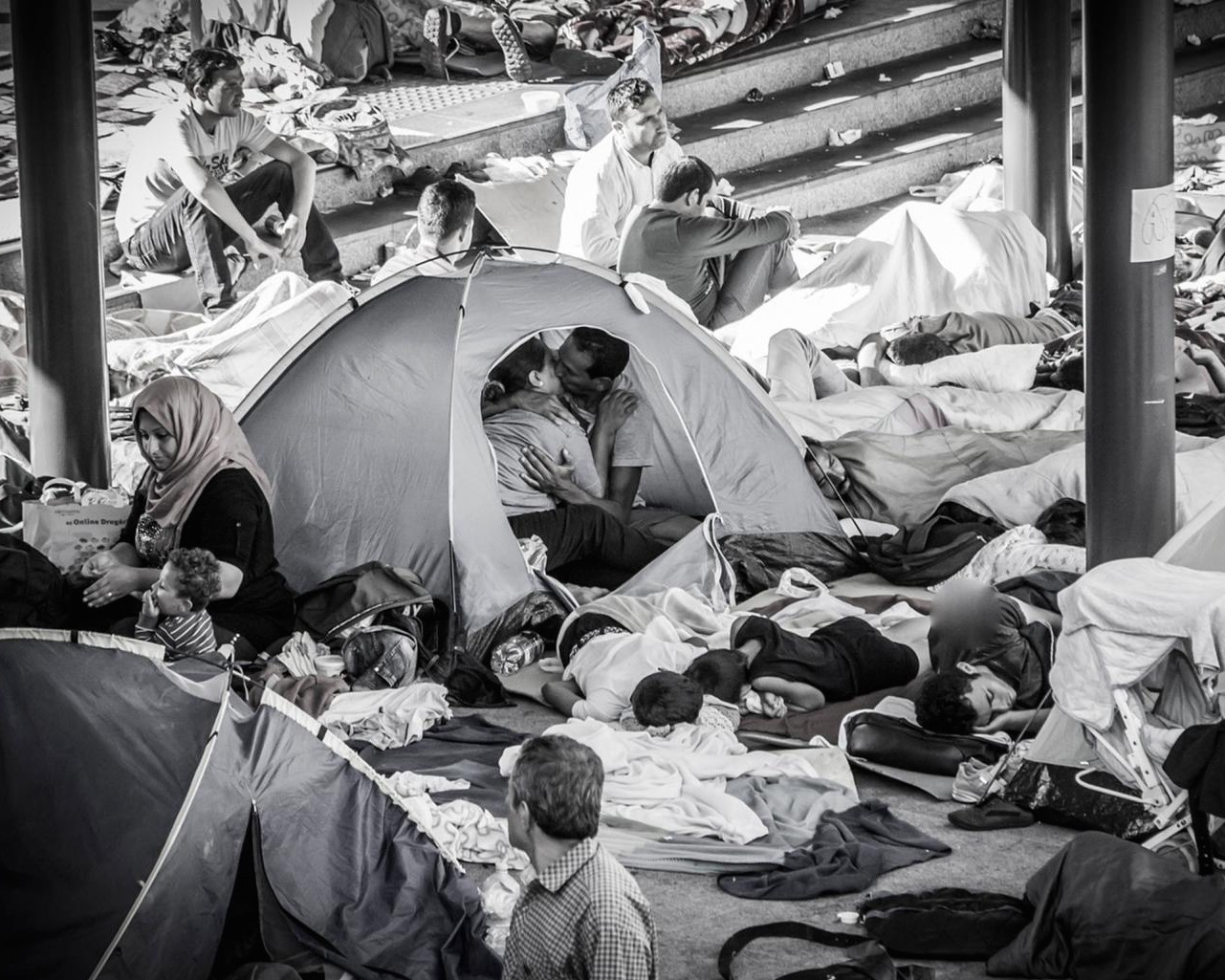 So now we're witnessing another face to the Escalating World Refugee Crisis. A very underhand blocking movement is going on, which has been trying to close all the doors. It was to be expected. Millions of disenfranchised people pouring into Europe could never be a part of the so called 'elite's' plan to control populations and economies. But it's not deterring people from offering their love and support. Heightened consciousness is opening the heart of humanity leaving the powers-that-be in disarray. It's just another example of sticking fingers and thumbs in a bursting dyke, which sometime in the future, is sure to give way...

The refugee crisis reflects a humanitarian upwelling. The powers-that-be would control our world and its resources, but they can't indefinitely control the expansion of human consciousness. The liberation of humanity's soul, increasingly, will have uncontrollable effects.

Yes, by destabilising countries and populations such as those in the Middle East, the powers-that-be are clearly using such disruption of communities to exert greater military, economic and political influence. But this strong-arm coercion is having incalculable effects, ones that are now backfiring in a spectacular way. It always happens when people try to exert control over the natural order of life - it always eventually backfires. In this case, the refugee crisis risks destabilising the entire political system of Europe - which to my mind is positive - it undermines the risk of so-called 'one-world-government'.

To watch the plight of the refugees is heart-rending, yet at the same time, it's activating a wave of unstoppable, supportive love. This is from the UK's Independent...

Wow! This is simply heart melting. It's a story which until now, appears to have been suppressed by the elite's mainstream media. In unequivocal terms, it reveals the expanding heart of humanity, and how ultimately, it won't be constrained. We may wish such crises didn't have to happen. But it's the status quo of control, injustice, inequity and exploitation which is endemic to our society that this global event is beginning to challenge. To my mind, that can only be a good thing.

As above so below. As below so above.

All planes of consciousness are interrelated. What we may witness in the lower physical plane, is often a metaphor for what's generally going on in the higher 4D field - that which shapes our reality. 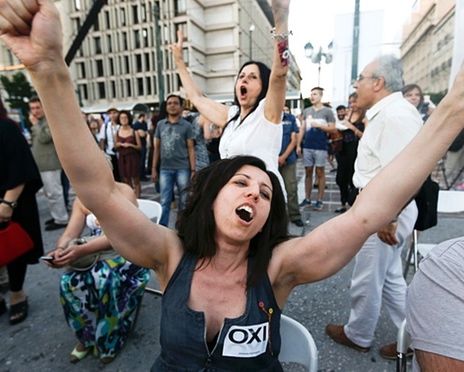 We are in the midst of a monumental shift in consciousness in the field around us. It's been precipitated by the breakdown of an interdimensional intervention. The physical powers-that-be are merely the visible, thin end of the wedge. But now, as the intervention is being unwound at an energetic level, then the foundations of their power is withering. The elites are in disarray and losing control.

It so reminds me of the biblical story 'Exodus' from ancient Egypt: slaves exploited and dehumanised by the controlling Pharaoh, who finally breakout supported by uncontrollable acts of "God" - the superconscious field realigns, the passage across the 'Red Sea' Karmic Plane reveals itself.

The economy is another example of the powers-that-be losing control, as the federal reserve contemplates yet another round of bail-out 'quantitive easing'. But as they're rapidly discovering, there's only so much debt growth you can bail-out. The impetus for a global economic reset grows day by day. It will surely be their last ditch thumb in the dyke. But as I've explained in Divinicus, even this will be temporary. Merely shuffling the deckchairs on the sinking ship.

Rise of the Divine Human

This are confusing times. We must look at the interplay not from the mind, but from the heart. We must feel the shift in the 4D field to really be able to understand the surface level commotion.

To me, I'm feeling very positive shifts happening. An ultimately uncontrollable expansion of consciousness - an unstoppable 'Exodus' from the old world mentality. But it's not coming from mainstream leaders. It's coming from the rise of very ordinary - totally extraordinary - divine human beings. Just as people are opening their doors and hearts to the refugees, let's be sure to open our hearts to the wider shift. Let it stimulate our actions in day-to-day life. Let the upwelling cleanse tired and weary minds with love.

This rise of the divine human is inevitable. Let's surrender into the surging tide, harness it inside ourselves, and watch it's undeniable effects ripple throughout the wider world...

Thank you for sharing Ben ! i especially love the end part because it reminds me strongly of the " Gospel " singing
power ; Some voices are added to hers and that creates a deeper sense of Unity Conscious loop in the song . She truly lives what she sings - that makes the real artists genuine , authentic and so joyful to listen to . Some even display amazing leadership skills . This year , i received the great opportunity to go to the concert of Paul Simon & Sting ( i was absolutely not intenting / programming to see them at all ) prior to the day i received the tickets . Those 2 amazing singwriters / singers showed me that age is nothing / Being true to ourselves is utterly important and that nothing is impossible ( + Sharing to bring higher perspective and Love is deeply encouraged ) . Real authetic artists create that Huge difference . Martha has those same amazing qualities . Very happy discovery . Much love guys ,
Jean

Outside and inside - the child in the Ocean

I've been on massive journey with the recent David Cameron initiation rite salacious revelations - deeply feeling that distorted, manipulating, controlling and malign use of sexual energy that has been so woven into the deepest fabric of our society which is lashing out as it is being destabilised - a sort of internal Syria.
Like deep deep sysmic shudders - I know you've been saying it Open but, deep shocking shifts
Vendictive - still trying to hold together the fault lines with control, barbarity, humiliation and vendictive malice.
And thank you for pointing to Tantra in the new addition of five gateways - as a female this is land I am reclaiming and but as I regain so e feeling even more so. Feel the barbarity.

glad you liked it Kim.

I was thinking about how musicians that touch people are 'leaders'. and how in a sense theyve a responsibility in that. just look at how (typically 'shallow') main stream music influences children and teens for example. hmm!
Soulful Musicians are storytellers, pioneers, mirrors - leaders through inspiring people to feel. gets people into feeling and inspiration. Its really inspiring seeing more musicians with integrity and soulful expression emerging.

It feels like a more aligned form of leadership I think!

Wow what a beautiful song!

Wow what a beautiful song! Thanks for sharing here Ben, it moved me to tears.
Kim

glad you guys found the song beautiful and powerful too. I definitely feel a vulnerability yet warrior joy in her performance.
:-)

What a beautiful track.
Way to go, Martha.
Nice one, Ben.

Sent shivers up my spine

Wow Ben - that touched so deeply. Sent shivers up my spine.

Open *OK*
(I've tagged it to the main article)

I am spinning off into song again. This time it's The Beatles, "All You Need Is Love."

how synchronistic I watched this song video yesterday.
moving.
https://www.youtube.com/watch?v=_APa4lIDGq8&feature=youtu.be&html5=1
(and you can download the song if you feel to from the link mentioned on the page).

A personal little story to reinforce the sentiments in Open's article;

A friend of mine (a young woman with young kids of her own and a very busy life) decided she was gonna collect donations and drive a van over to Calais to deliver direct to the people there. She set a deadline of 2 weeks. In that 2 weeks she filled her van and 3 or 4 other vans came along with her, also loaded up.

Awesome article Open! Thank you for always bringing current events full circle...shedding light on the deeper meaning. Feels really uplifting to hear of such compassionate, openhearted offerings from being to being. Perhaps truly seeing themselves in the other. Much love, Jen

Such lovely feedback - so glad you benefitted from Divinicus Steve.
I've heard that from quite a few people now and it warms my heart.

"let's be sure to open our hearts to the wider shift. Let it stimulate our actions in day-to-day life".

This is truly happening to me, I feel more compassion, less Judgement and more understanding.

I also HIGHLY recommend the DIVINICUS book, I have read this 2 times already and soon will be going through my 3rd passage, It is what Great Stories and personal experience's are made of, it captivates the mind with knowledge yet demands a deeper understanding, a deeper feeling provoking consciousness to open. (No Pun intended 'Open') :)