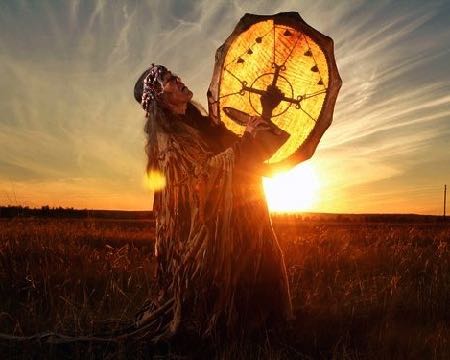 We're moving through the solstice again - a time of great spiritual significance - one of passing, of change and moving on. Be attuned to your deep inner feelings, then you may notice subtle shifts and an invitation to transition in some way. By honouring these, it changes your inner landscape, so your soul begins to flow differently, preparing the way for new beingness and new beginnings to arise. So it's good to celebrate the solstice. Perhaps with meditative prayer or ceremony? With this in mind, I share this beautiful shamanic video, to inspire a deep sense of connection with 'Great Spirit'. Pause, breathe, let it inspire inner shifts...

What is your 'prayer' for the solstice?

The Solstice is upon us once more! It's a time of pause to connect with "Great Spirit", to honour the changes that you've made to this point and to open a space for the new to start to flow in. I shared a great video in my lead article (scoll to the top), which is my 'prayer' for the solstice - Nahko Bear always gets me in the mood!

Thanks Anatoly. It’s both comforting and challenging to hear from others who have gone through similar issues on the path, and your perspective helped me look at my own differently.

Wishing the very best to you and your family this holiday season!

I am like you, Paul, have had similar concerns about supporting the family being the only "bread winner" in corporate business.  And to some point i still have some apprehension as my energy no is longer there at work as it used to be.  But i have found something rather interesting happening in my case when i just let go.

I will not compromise my soul but I still have all other soul aspects i can work with including diplomacy, empathy, commitment and others (seven rays in Openhand approach). Does it mean i have to quit a job? It depends.  I ask the question "does it serve to keep the job?" and at the same time i let go of that which doesn't serve.  I am being authentic with all the engagements at work and just let it roll.

Yes, there maybe certain expectations from the family to provide financial stability but i will net let it burden me.  I trust and i flow.  Feels like riding a wave, like a surfer. I don't know when the wave will break binging me to the shore, but i ride as long as i can.  And i notice something miraculous seeing how the flow has taken me so far dodging all the engagements that wouldn't serve.

I am the surfer and wish you the same!

Life's true architect is inside of you

LOL - Paul that's priceless - thanks so much for sharing

A few other things speak...

- digging down in the mud for buried soul gold
- the ducks aligning being fragments of soul integrating and aligning with your path
- ducks are very resourceful, able to live off fairly little, yet being happy with it.

I don't always agree with this guy's philosophy, but he makes great videos and there feels like a lot of truth in this one - it felt applicable to share with you....

Thanks so much Open -

Onboarded your suggestion and found some much needed time to freewheel after a business meeting. I was shown unequivocally that I needed to leave my corporate career of 15 years several months ago, and have been agonizing over the HOW ever since. Intellect driven questioning like how to pay the mortgage and support my wife and children, with the underpinning of worthiness and Trust featuring heavily.

Drawn to a park called Echo Lake in a part of town I’d never been before. Walked around just following the Pull for an hour as the last vestiges of sunlight faded into a brilliant cold sunset.

In addition to tons of playful squirrel communication which had already been happening all day long, my attention kept getting spiked by a solo white duck on the lake - separate from several other coupled pairs but definitely the leader - who was determinedly submerging his head into the freezing water by the shoreline over and over - stirring up the muddy sediment to find nuggets of food.

Kept meandering and from the other side of the lake I noticed suddenly that all of the ducks were all exactly lining up from my vantage point - aligning and realigning themselves over and over into a straight line, with the white duck stationary at the top all the way on the other bank.

I knew this was a key part of my message but it didn’t fully drop at that point. Stayed open and looped around the lake again, and they started moving towards lining up again. Besides the definite support of my continued “digging in the mud,” the phrase suddenly landed and I cracked up laughing:

They immediately all started quacking loudly in unison to let me know I’d finally gotten it.

The solstice - how to celebrate for cleansing & upliftment

We're moving into the solstice again, which takes place this time on 21st December. To me it has special significance because it's around the completion of a yearly cycle. So it's a time of endings and beginnings. let

My suggestion is to take some time out in nature, and to meditate plenty. Then to feel what you're being given to let go of, so as to create more inner space. Then play the Openhand game "show me!" Take off with no agenda other than to witness signs and synchronicity - they'll surely guide you as to what to work with and unleash in yourself to bring a new invigoration and vibrancy; new creativity.

Wishing you all well this solstice

Open, thank you for such an

Open, thank you for such an informative feedback – very interesting indeed!

Yes, I can see/feel that shamanic energy is foundational to Openhand. Looking forwards to doing the sweat lodge again, this time for longer! Oh, fire walking! Hope I get to experience this someday! Oh my!

I came across Buxton’s web site a couple of months ago whilst looking for info on shamanism. I have been searching for an approach that will speak to me. His spoke to me and now you are here confirming my gut feeling – thank you :)

Quan Yin, the compassionate warrior queen – love her! Her statue and painting (commissioned a friend artist to paint her for me…) are proudly taking a stand on my altar. DK, I do not know – interesting…had a look and found these wonderful words of his! Breath taking!:

“Before closing this message to you today, let Me refer briefly to a beautiful aspect of the returning to Earth of the Ascended Ones, in answer to the calls of those who accept their reality and assistance. These Great Ones always – without fail – express their sincere and intense gratitude to the Source of their life which gave them their Ascension. Such releases of Divine Gratitude from their Blessed Selves remains in Earth’s atmosphere as great Foci of their Perfected Consciousness – magnificent thought and feeling Forms of Blazing Light. Then, as is the Nature of the Ascended One’s Life and Light, these continue to expand and expand their perfection to all and all. Now gracious reader, will you too earnestly endeavour to produce, release and expand the God-momentums of your own lifestreams – so that everywhere you move you leave a permanent blessing of your Light here – for all to enjoy! I AM your friend of ever expanding Light, Djwal Kul”.

Yesterday night at the dance…on the altar a beautiful deck of cards called ‘Ascended Masters’. I pick one…’The Flow of Prosperity’, Lakshmi: the Hindu Goddess. The message: A new flow of prosperity is supporting you. Wow!!

And the other set of oracle cards…I pick one… 'Time to Move on'…the message: It’s time to let go of the old and worn out so that the new can come in”. Wow!!

Links between Shamanism and Tibetan Buddhism (and Openhand!)

Yes indeed, although many might consider Shamanism was founded with the First Nation Americans, actually it long precedes that, having close ties with Tibetan Buddhism - in my direct knowing, Shamanism arose from Tibet.

Shamanism is certainly interwoven through the Openhand foundation energy. Which is why the Sacred Sweat Lodge is the climax of the level 3, and fire walking also features on some of the retreats - and especially the connection to power animals and nature.

If shamanism interests you, then you might like to check out the work of Simon Buxton within the Sacred Trust, which is actually based (not too far from you Aspasia) at Gaia's House in Dorset. For me, Simon is a genius of the art. You may find it a touch 'prescriptionary', but as long as we step through the form offered, there is lots to gain.

You may also be interested in the work of the "Tibetan", known as Djwahl Kuhl. Who was channeled by Alice Baily in the early 1900's. In the esoteric tradition, DK is known as the "Lord of the Seventh Ray" (there are similar interpretations of the seven rays that we talk about at Openhand). In the esoteric tradition, DK has worked very closely with Quan Yin. I find the 'teachings' closely affiliated with shamanism, and probably provides a good bridge between the two. I consider the work more 'mysticism'. There are many jewels to explore consciousness, especially how it manifests (like the Treatise in White Magic), but only if you read between the lines - so is the limitation of channeling.

For sure, let's embrace the jewels in all of this wonderful work, but step through the form into our own formlessness.

All Life is Sacred

Wow! Very moving! My tribe :) I looked on their web site and this is their mission (part of it) – just amazing!

“Within our global community, we have access to the tools needed to make changes, take action and spread awareness of how to live in harmony with Mother Gaia herself. We are honored to be a force of attraction for positive and creative minds during these often-corrupt times. With your trust and support, we humbly accept this role and speak our prayers of intention to take direct action…”

Indeed, ‘there is no private salvation’ - that’s the Bodhisattva ideal.

It’s very interesting I found out that - and quote:

“the true origin for the word Shaman can be tracked from the Sanskrit initially, then through Chinese-Buddhist mediation to the manchú-tangu, indicating a much deeper but now overlooked connection between early Buddhism and Shamanism generally. In Pali it is schamana, in Sanskrit Sramana translated to something like "buddhist monk, ascetic.""

Well, well not surprised I am attracted to shamanism! Ha ha!

Earlier today I was in St Magdalene’s church near where I live teaching ‘Pilates Flow’ and I see a copy of an ink & pencil drawing called “prayer hands” by – I was told – a German artist called Albrecht Durer. So, I am praying tonight in movement through conscious dance with my local peer-led group (tribe) – can’t wait!

Enjoy yours everyone x

Only just seen this video, it speaks to me deeply, thank you for sharing.
Lesley
x